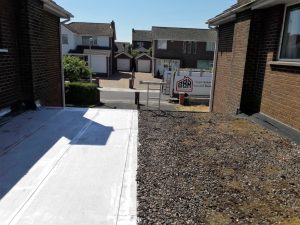 As Flat Roofers we always try to stress that (Summer) Flat Roof Maintenance is more important than Slate or Tile Roofing and will dramatically increase the life of any Flat Roof(in reasonable condition) at minimal cost.

Most people know Gutters should be Cleaned, Checked & and any Minor Repairs (Pointing Etc) made good etc.

But when thinking ahead with Flat Roofing there are many ways your Flat Roof can be improved through predictive preventive maintenance, many products including bitumen based paints etc may be added to your flat roof at all stages of its life which can protect, enhance and dramatically increase its life span, while preventing damage from water ingress.

to the dieting business, there’s always the next big thing

it starts to get a little more complicated, there’s always big headlines

fitting the felt accordingly before the Bitumen Cooled. This

was quite a major procedure especially in Northern Ireland and its

very changeable Weather. The introduction of Torch on Felts however

Felt with Bitumen Based Aluminium Paint is a superior product to

Butyl & EPDM in many ways.

is still a more skilled job than Butyl or EPDM.

NIHE began issuing grants on Butyl. Not because it was a better

was harder to “make a mess” of it. IMO Felt was better back then and

is still better Today. But it must be done right.

Butyl is slightly more expensive than EPDM It is also important to remember that both Butyl and EPDM come in sheets made to order. Some Flat Roofers “pretend” not to or simply don’t know this and lead people to believe that EPDM comes in liquid form only. I have tried the liquid form of EPDM and found it is problematic with the Northern Ireland Climate and is prone to blistering and cracking. If someone requests a rubber roofing sheet installed on new decking and don’t specify which type I will generally quote for EPDM simply because it is cheaper and more logical in competitive tendering not because it is somehow better for Flat Roofs. Often people ordering Butyl are given EPDM as they cannot tell the difference.

Of course there are plenty of Flat Roofers claiming X, Y & Z.

and Easier) than felt (Especially in the Winter months) This

doesn’t make it a better product which its not. Generalising

and comparing  EPDM with felt is misleading as (for a start)

expensive than felt and is generally used as single layer. Felt

is normally multi layered and up to half an inch thick. So

probably still won’t leak, whereas EPDM is much more

Felt Roofing Generally hits Rubber Roofing out of the Park.

Comparing English with other Languages?